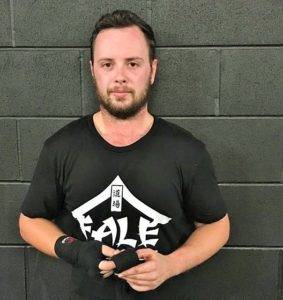 The referee is a valuable component in a professional wrestling match. Tasked with the responsibility of cutting through the animosity between the wrestlers in physical conflict, the ref must ensure that the combatants compete within the boundaries of the rules and to conclusively resolve a winner. In the case of an exhibition, the referee normally doesn’t have to deal with animosity, their responsibility is to enforce the boundaries and declare a victor. At the Fale Dojo Exhibition event, the role of the referee was entrusted to Fale Dojo’s newest addition, Lloyd Morgan an experienced referee.

Morgan joined the New Zealand wrestling scene as a teenager. His reasons for getting into wrestling was to do with gaining confidence and he looked at the theatrics and splendour of pro wrestling to help build his character.

“I went out looking for something that would break me out of my shell, and I figured that wrestling takes confidence to do. So I sought out some professional wrestling companies.”

Morgan initially tried out to be a wrestler which led to an unsuccessful tryout. Nevertheless, he was presented with an opportunity that would begin his journey as a referee.

“I noticed there was a promotion in Auckland that was holding a tryout, so I figured sure why not give it a go.”

“I didn’t make the cut, but an opportunity arose where I was asked if I would be interested in being trained to be a referee. I was pleased with the proposal as it got me the same results that I was looking for.”

Over the next several years Morgan would officiate matches throughout New Zealand’s north island. During which he would form acquaintances with people associated with Fale Dojo. Looking to keep up his fitness, Morgan began to train at the Dojo at the recommendation of his associates.

“I had worked a lot of shows with some people who are either currently or have finished their time going through the Young Lions programme or with people who work behind the scenes to make Fale Dojo what it is today,” Morgan explained.

It was during his time at the Dojo that Morgan was asked to be the referee for the Exhibition event.

“I started training at Fale Dojo to keep fit when I was approached shortly after to take part in the show,” he shared. 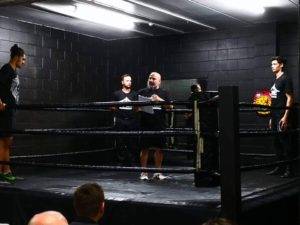 This was a milestone for Morgan as he would be facilitating matches of the strong style genre. An adjustment to what Morgan was familiar with though it was minor as he noted.

“The transition to strong style was somewhat small,” Morgan observed. “The only difference was just the style of wrestling.”

Morgan told of his experience at Exhibition as one that allowed him to watch the students demonstrate what they had absorbed in their training at Fale Dojo.

“It was an exciting experience,” Morgan stated.

“I got the chance to referee for a different company, and see some familiar faces wrestle as well as some new up and coming trainees and some established wrestlers from overseas in the ring.”

“Of course as the referee, I had an up close and personal view of the matches,” he added.

“But these matches unlike the ones that I’ve officiated in the past featured students showing what they’ve learned so far from Toks Fale and his coaches.”

“I noticed a gradual change in wrestling from those that I have seen wrestle before.”

Morgan also cited the close setting between the wrestlers and the audience which he believed was constructive to the wrestlers learning experience.

“The intimate setting at Exhibition helped with the students’ training,” said Morgan.

“Not only did the audience give the trainees the experience of performing in front of a live crowd, but the size of the audience wasn’t overwhelming.”

Now as an addition to Fale Dojo, Morgan is anticipating the arrival of more trainees from around NZ and the world. He is also excited to work towards his new goals.

“What I’m looking forward to is getting the chance to see new faces from across New Zealand and the world, step foot into that ring,” said Morgan.

“I also have some new goals to work towards,” he concluded. “Such as looking at ways of refereeing to take me across this beautiful country of ours and overseas.”

The next Fale Dojo Exhibition event will take place on Saturday, April 20 at the Fale Dojo training facility in Otahuhu, Auckland.