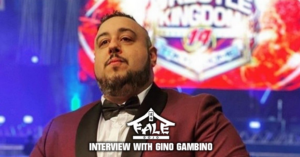 Gino Gambino is a Fale Dojo / NJPW New Zealand Dojo graduate, he is also the Dojo’s Australian liaison. Gambino’s role is to help set up Dojo try-outs in Australia and put forward talent to go through training via the Dojo system. Names such as Andrew Villalobos from Sydney and Jake Taylor from Melbourne have come through this pathway and graduated to the New Japan Pro-Wrestling Dojo in Tokyo. Gambino is passionate about rejuvenating professional wrestling in Australia and New Zealand. He strongly believes that wrestlers from Down Under have the talent and skills to be recognised on a world-class level. As a wrestling personality, Gino Gambino is a quick-witted and dangerous veteran of the squared circle and a member of the notorious Bullet Club stable. Gambino’s wit and charm is also put to valuable use as a member of the New Japan Pro-Wrestling English speaking commentary team.

Professional wrestling was a big part of Gambino’s life. As a fan, his favourite wrestlers were extraordinary characters from different landscapes that captured the fans attention with their aura.

“My favourite wrestlers were guys like Abdullah the Butcher, Antonio Inoki, Hulk Hogan, and Stone Cold Steve Austin,” said Gambino. “These were some amazing guys that seemed to be larger than life. They weren’t exactly the biggest men, but they really portrayed these huge characters, and it was just awesome to watch.”

During his childhood, Gambino played sports that were ingrained in the Australian culture.

“I grew up playing mainly soccer and rugby,” Gambino revealed. “I just enjoyed tackling in rugby, but soccer was my main sport”.

“I could’ve pursued soccer,” he added. “But I was always a larger kid, and I think the love for wrestling was more important to me.”

Gambino’s first interaction with wrestling in a live atmosphere was at a sumo event which he attended in the 1990s. He distinctly remembered the principles of this art which also applied in pro wrestling. This impacted Gambino so much that he decided to pursue his pro wrestling aspirations.

“My first contact with wrestling was when I went and saw some sumo wrestling when it came to Australia in the ’90s,” he recalled. “The respect and the discipline that these wrestlers showed was really inspiring. It made me see it as a sport that takes a lot of dedication, time, and respect.”

Gambino continued: “I really enjoyed the idea of wrestling and performing. Seeing these elements working together in sumo which also made me see in professional wrestling was a huge thing.”

In 2005, Gambino made his professional wrestling debut at a time when the Australian wrestling industry was in a diminished state. Despite years of low crowd attendance and a lack of media coverage, Gambino stayed true to his passion and was loyal to his country. He strongly believed that the local wrestling talent as well as in New Zealand had the potential to compete with the best wrestlers in the world.

“But the reason why I did stick around and why I was passionate is that I knew we could make something big,” he added. “I knew we were good enough and had the talent and the skills to make ourselves as good as anyone else – as good as Japan and the United Kingdom. I really saw that more so when I travelled to New Zealand, so I stuck around because I knew we would make it one day.” 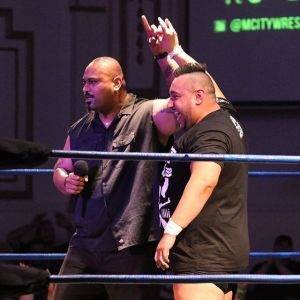 Gambino’s vision in the local wrestling landscape was strengthened when he met Toks ‘Bad Luck’ Fale during his visit to New Zealand. Gambino also trained at Fale Dojo where he received his formal wrestling education.

“Training at Fale Dojo really changed the way I looked at wrestling,” he stated.

“I was taught a real sense that this (pro wrestling) was a real sport that it deserves respect, and you had to have a great attitude and passion to do this.”

Gambino praised Dojo’s training regime for the physical and mental challenges as well the rewards that came with completing the workouts. He also noted the Dojo’s emphasis in equipping their students with the knowledge and responsibility of wrestling holds matched with the teachings that develop character and integrity.

“The physical training was hard and at times almost back-breaking, but you come out the other end a better person and a better wrestler,” said Gambino endorsing Fale Dojo’s curriculum.

“I think a lot of training schools around the world might just teach you a move and walk away and the students can say, ‘I know how to do a suplex’. But Fale Dojo really teaches you how to become a better all-around wrestler and person, and that’s very crucial when nurturing talent”. 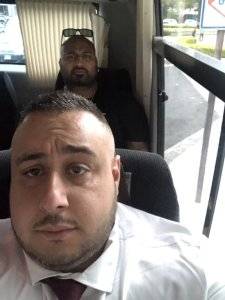 Fale and Gambino formed a friendship that was founded on a common goal to better the wrestling scene Down Under. They discussed early on the possibility of bringing a New Japan Pro-Wrestling tour to Australia which seemed far-fetched at the time. Although their vision was too bold for some naysayers to fathom in spite of efforts to include them in the plans, Fale and Gambino put the wheels in motion to promote the first NJPW tour of Australia. This event spread across four states and was held in such venues that had not hosted wrestling in decades.

“The first tour that I helped Fale-San co-promote in 2018 was crazy,” recalled Gambino.

“It changed the Australian scene in the sense that we could do this. We really stamped our comeback on wrestling by being at Festival Hall again, somewhere we haven’t wrestled for over 20 years.”

“Festival Hall was our Korakuen Hall, or our Madison Square Garden, or our York Hall. It was the venue where Australian wrestling was born,” said Gambino as he detailed the resurgence of wrestling in his home country.

“To be able to go back there and hold a huge New Japan show was massive for us, and to have crowds of three to four thousand people was really important. I think that stamped our comeback on wrestling that we are here and we’re ready.” 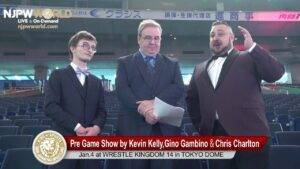 On April 2019, Gambino transitioned to commentary, joining NJPW’s English speaking commentary team. This, a role which Gambino has thrived due to his remarkable talent of talking. In addition to using his platform as a spokesperson for Bullet Club, Gambino’s voice brought awareness of the Australian and New Zealand influence on the New Japan presentation. This included Gambino’s mentions of the Fale Dojo activities which he regularly brings to light during the young lion matches involving the counterparts from the NJPW Dojo.

“I was lucky to be asked by New Japan to come and do some colour commentary for them,” stated Gambino.

“I’ve always been a fan of the product for a long time. Being a wrestler and having that experience to bring on board to that already awesome broadcast team was really cool.”

Gambino is also excited to be working with New Japan’s lad play by play announcer, Kevin Kelly. The opportunity has allowed Gambino to forge a close friendship with Kelly and gain his valuable insight as a revered veteran of broadcasting.

“Kevin Kelly is a fantastic guy and a real professional,” said Gambino of his broadcast colleague. “Spending some time with Kevin over this tour and at the commentary desk has been a wonderful and fantastic experience and I’ve really learned a lot.”

Gambino is hopeful that his accent has resonated with Australian and New Zealand viewers of the NJPW World video streaming service.

He shared: “I really hope that Aussie and Kiwi fans of NJPW World are able to hear my accent and feel a little bit more at home, knowing that they have one of their own on the commentary desk. It’s been a really great experience.” 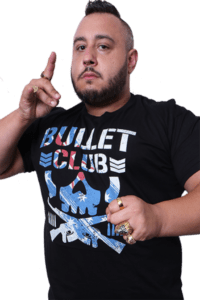 As the anticipation builds toward the ‘NJPW Southern Showdown’ tour, Gambino would like to encourage every wrestler from both sides of the Tasman to support this upcoming event. Gambino, a veteran of 14 years has always emphasised the importance of supporting and promoting local talent, helping the wrestlers themselves to grow into better performers and the promotions to expand to give fans more choice. Gambino wrestled in front of very small crowds at the start of his career and is now involved with New Japan not only as a member of the roster but also assisting Toks Fale to get the product more exposure in the Southern Hemisphere. His closing comments still show how enthusiastic he is for the cause of local wrestling and how eager he still is to see it flourish and develop both locally and internationally under the NJPW banner.

“I’m looking forward to good wrestling and great crowds again,” said Gambino. “I think it’s really important that all wrestlers get behind this tour, that we prove to the world that both in Australia and NZ we are on top of our wrestling game, and we’re as good as anyone else.”

“As the first tour in 2018, this next one will show that there is a wrestling fan base here, that we are ready and willing to take on the world,” Gambino concluded.

“So go out there, buy a ticket, support your local industry and support wrestling, because this tour is going to be amazing!”