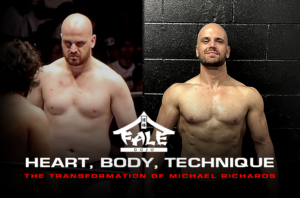 Michael Richards is a senior member of the Fale Dojo / NJPW New Zealand Dojo young lions. As a graduate of the June 2018 intake, Richards earned the opportunity to gain further training at the New Japan Pro-Wrestling Dojo in Tokyo. Richards brought his skills back to Fale Dojo in 2019 to help develop the next recruits of lions whilst working towards his goal of becoming a full-time member of the NJPW roster. Richards edged closer to his goal later that year; making his New Japan debut at the Southern Showdown tour of Australia, before going on to participate in the Young Lion Cup tournament marking this event as his first wrestling appearance in Japan.

Much has happened with Michael Richards in recent times. His desire to return to New Japan has intensified, to the point where the Senior Lion has taken some remarkable steps.

“I have gone through a lot of changes since 2020, whether that has been my physical appearance or mental focus,” said Richards. “I left my full-time job so that I could focus entirely on my career as a professional wrestler.” 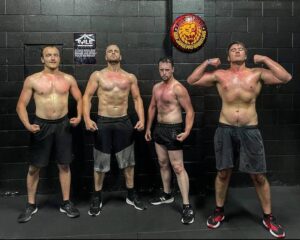 In the February intake of 2021, Richards served as a senior to the young lions who recently completed their three-month professional wrestling training course. This role entailed leading and setting an example in demonstrating the intricacy and detail that goes into each daily task whether it be training or chores.

“As Senior Lion, I wanted the young lions to be the best versions of themselves that they possibly can,” Richards shared. “I could be hard on them at times because I knew that they had so much potential.” 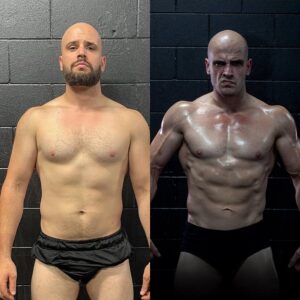 Richards is as demanding on himself as he was towards the young lions. This is evident through his recent transformation both physically and mentally.

“My transformation wasn’t something I planned on doing,” explained Richards. “I just did what I was told by our coaches [Toks] Fale-San, Tony-San [Kozina], Mark-San [Tui], and Tangi-San [Ropati], then I saw the changes in my body.”

He added: “Before the February 2021 Intake started, I set myself a goal to be in the best shape of my life. We were all given nutrition plans to follow over the course of the intake. I’m proud that I stuck to that plan 110%. I didn’t have a cheat meal and I was training over six hours a day, Monday to Saturday.” 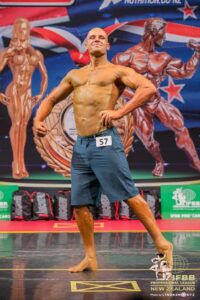 Richards stayed committed to his nutrition plan designed by Tangi Ropati, Strength and Conditioning Coach. As Richards’ body adapted to his diet; he would begin to notice changes in his appearance. This revelation would also give the Senior Lion the confidence to compete in his first bodybuilding event.

“This was a test of my mentality,” Richards revealed. “But it was the discipline that’s been instilled in me over the last three years training in the Japanese strong style here at Fale Dojo and at the NJPW Dojo that helped me see this journey through to the end.”

Richards added: “Discipline is what I apply to everything I do, particularly with my roles at Fale Dojo. As well, I think it’s why I’ve been able to sustain my focus on the bigger picture.”

“With Tangi-San being from the bodybuilding industry, it was an absolute honour to learn from him,” Richards spoke of Ropati, his mentor and coach. “I applied everything taught by Tangi-San to my diet and training. Tangi-San’s expertise has definitely helped improve my in-ring ability. I feel a lot stronger and explosive.” 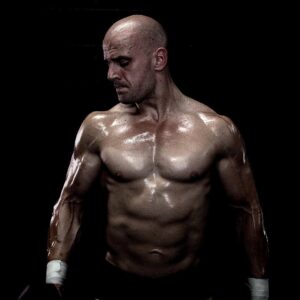 Like all physical contact sports, strength and conditioning, and a believable appearance is a crucial element in professional wrestling. It is a necessity that one who pursues a career in the ring with the intention of making it their livelihood must heed as Richards explained.

“Professional wrestlers are just that – PROFESSIONALS!” declared Richards. “Would you see an All Black player or an NFL player eat junk food and trash diets, or a heavyweight boxing champion not have the imposing look of a legitimate fighter? No, then why should I? In fact, why would I want that for anyone that comes to train at an international facility like Fale Dojo?”

“I read an NJPW article which I remember distinctively these words in this exact order, ‘Heart, Body, Technique’. That can’t be any truer and I will always remember that,” Richards recalled vividly. 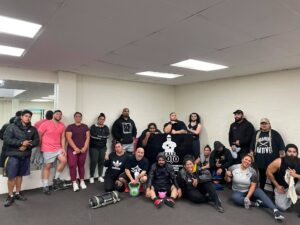 An important part of Michael Richards’ fitness regime is taking part in the Dojo’s General Community Classes, and in addition to taking part; Richards serves as a Trainer of the WrestleFit and Boot Camp classes.

“I’ve been putting in a lot of time at the Dojo,” shared Richards. “I love the community that comes to take part in the General Community Classes. It’s always a good vibe and they bring their best attitudes.”

“The WrestleFit classes change up every week, you’re not going to get the same routine,” explained Richards. “The workouts are high intensity with some added short rest times, this exercise also applies to pro-wrestling.”

“If you’ve yet to be part of WrestleFit, I guarantee that you’ll get a great workout and a real sweat,” Richards assured. “Like all of our trainers at Fale Dojo, I’ll guide you through to the end of the session, and you can also count on the support of our community.”

While Michael Richards is enjoying his time at Fale Dojo, he is always alert about achieving his ultimate goal.

“I’m pretty sure everyone knows that my next goal is to make my way back to Japan and be on tour full time,” said Richards the Senior Lion. “The last months impacted me tremendously, I now feel that I’m in the best shape of my life. When the opportunity comes for me to head back to Japan, I will be 100% ready.”

“It will be good to get in the ring with the other lions, especially my Dojo brother, Yuto Nakashima,” he shared.

“I know what I need to work on,” Richards observed. “So right now it’s just a matter of time before I main event the Tokyo Dome and become the IWGP World Heavyweight Champion.”

“Another long-term goal of mine is to be the first official graduate from NJPW New Zealand Dojo,” Richards expressed in closing. “I’m confident that I’m making the right steps at fulfilling this achievement.”