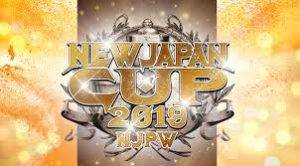 SANADA vs. COLT CABANA:
Colt with a Headscissors, SANADA tries to push his way out a few times, but Colt pushes him right back down, he does it a third time, but SANADA flips out of it, SANADA blocks the Monkey Flip, Colt stops a Paradise Lock attempt and falls into flash pin for a 2 count, Colt looks for The Lady of the Lake, but instead pulls him into a flash pin for a 2 count, The Artful Dodger, but SANADA finally ties him into The Paradise Lock then breaks it with a Basement Dropkick to the ass, Colt rolls to the floor, SANADA invites him back inside, Colt goes around and gets back in, SANADA catches him with a Dropkick to send him back to the floor then follows with a Pescado, back in, Colt rolls all the way to the other side and back out, SANADA sends him back in for a 1 count, Colt with Jabs followed by a Bionic Elbow, Flying Asshole, up to the 2nd, SANADA rolls out of the way, but Colt with a Double Jump Splash for a 2 count, SANADA avoids the Quebrada, Colt blocks Skull End, Fireman Carry, SANADA slips out, Skull End blocked again and Colt takes him down into The Billy Goat’s Curse, but SANADA makes it to the rope, he sets up SANADA up top, Avalanche Hurricanrana, but SANADA holds on into a Sunset Flip for a 2 count, on the kick out, SANADA flips out into Skull End, Colt starts to fade, but makes it to the rope, SANADA up top with the Mutoh Moonsault, but Colt gets the knees up and wraps him into a Small Package for a near fall, Superman Leap, but SANADA rolls through, Colt tries it again, and SANADA catches him in Skull End, but Colt counters into a Victory Roll for a near fall, Asai DDT Flip into Skull End the hooks are in, Colt goes after the hair, but he’s in too much pain and taps out. SANADA advances to the semis.

ZACK SABRE Jr. w/TAKA MICHINOKU vs. HIROSHI TANAHASHI:
Tanahashi scissors the knee, ZSJ goes to the arm, but Tana escapes, Tana with a Double Knuckle Lock, ZSJ rolls through, they go back and forth, ZSJ grabs the arm and wrenches the shoulder, Tana takes him over with a Suplex, ZSJ goes for a Pele on the arm, but Tana blocks, ZSJ blocks the Dragon Screw and stomps on the arm, he manipulates the wrist and stomps the elbow, twisting the fingers, Fujiwara Armbar then to a Rings of Saturn into a flash pin for a 2 count, European Uppercut and that wakes Tana up, he comes back with Forearms, then European Uppercuts of his own, Flying Forearm, Body Slam, up to the 2nd with a Somersault Senton for a 2 count, ZSJ blocks the Sling Blade and goes into a Cobra Twist, Tana reverses it, ZSJ takes control back, Tana reverses again, Wrist-Clutch into a Pumphandle Drop, Twist and Shout blocked, ZSJ with a Scissor Stomp then a Penalty Kick, he kicked Tana so hard he’s clutching his own foot, Tana charges, but ZSJ with a Manji-Gatame in the rope, he breaks, but Tana with an Elevated Dragon Screw then a Dropkick and another Elevated Dragon Screw, he tries for the Cloverleaf, but ZSJ counters into a Triangle Choke and adds a Double Wrist Lock, Tana fights out and back to the Cloverleaf & ZSJ immediately goes to the rope, ZSJ with a Front Guillotine Choke with a Kimura, but Tana counters into Twist & Shout, a pair, make that a trifecta, Slingblade for a near fall, ZSJ blocks a Dragon Suplex, then reverses into a Manji-Gatame, he tries to lock his hands, but Tana breaks it and grabs the leg, ZSJ blocks the Dragon Screw, Tana with strikes, Dragon Screw countered into a European Clutch for a near fall, ZSJ breaks out another PK for a near fall, Zack Driver blocked, O’Connor Roll for a near fall, but ZSJ on the kick out looks for Orienteering with Napalm Death, but Tana blocks and hits an Inverted Dragon Screw before ZSJ could get it locked in, ZSJ counters a Dragon Suplex into a European Clutch for a near fall, Tana blocks the Backslide, but hits an Inverted Slingblade then traps ZSJ in a Prawn Hold for the win. Tanahashi will face SANADA in the semis.

The quarters are over and the Semi-Finals are now set.