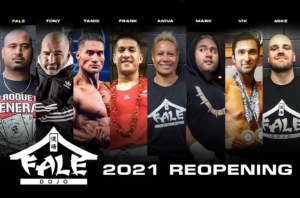 Fale Dojo is ready to once again offer its world-class training and fitness programme to the New Zealand public through the General Community classes. As a fitness facility, the Dojo is equipped to offer a wide variety of classes aimed at building up people’s fitness, their self-confidence and to support their journey and personal development. The classes are led by trainers who are experts in their disciplines and who relish the opportunity to pass on their knowledge and understanding. The Fale Dojo coaching staff reflect New Zealand’s rich and multi-layered cultural identity; they are equipped and ready to welcome people from all walks of life. 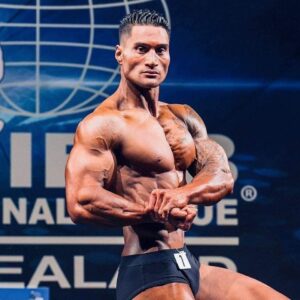 Tangi Ropati is the Head Trainer and specialist in Fitness, Health and Nutrition. Ropati’s wealth of sporting achievements in rugby league, fitness, and bodybuilding are utilised in his popular ‘Body Shock’ class. Ropati was born a member of a sporting family, both his grandfather Tagi and father Faaniva played rugby union respectively and represented the Manu Samoa rugby union team. Ropati’s league accomplishments include playing for professional clubs in Auckland, Australia, and England as well as representing Samoa in the 2008 World Cup and the 2009 Pacific Cup. After his stellar career in rugby league, Ropati entered the world of bodybuilding as a competitor with the New Zealand International Federation of Bodybuilding and Fitness where he won many championships.

“As a trainer at Fale Dojo, my goal is to make everyone from all walks of life feel welcome,” says Ropati. “I will help them achieve their fitness goals and take them to the next level whether its body sculpting, improving their fitness, teaching them about nutrition or just helping them to achieve whatever goal they have in mind.”

“I transitioned into bodybuilding when my league career finished up in 2015,” explains Ropati. “I decided to become a personal trainer and became qualified in 2016. I have been competing in bodybuilding and I love combining knowledge about training, lifting weights and nutrition to achieve a certain goal.”

“I can guarantee that I will push you through that dark place you need to go through in your fitness journey in order to get to the next stage of being the better version of yourself.” 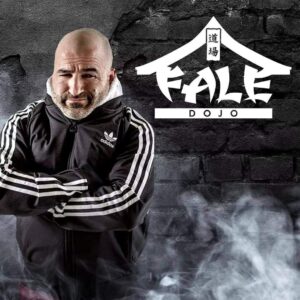 Tony Kozina is a seasoned veteran of the professional wrestling business with over 20 years’ experience. Having wrestled extensively throughout North America, this native of Portland, Oregon captured many championships on his travels. Kozina is also an experienced fighter who is well versed in kickboxing and Jiu-jitsu and has won championship medals at the 2011 NAGA tournaments in St. Louis and Chicago. During his lengthy career, Kozina had a hand in training some notable wrestlers that include, ‘Rogue General’ Bad Luck Fale, Kyle O’Reilly, Davey Richards, and Aaron Solow. In June 2018, Kozina moved to Auckland where he took up the role of Pro Wrestling Head Coach for the Fale Dojo three-month professional wrestling course.

“Our main customers are everyone,” states Kozina. “While we are an official part of the New Japan Pro-Wrestling training, we also offer an assortment of classes to the public!”

In addition to leading the three-month programme, Kozina teaches the WrestleFit and advance wrestling classes which are available to the general public.

“We have all walks of life coming through our doors and changing their lives for the better,” says Kozina. “Positivity and improving oneself is what we’re all about at Fale Dojo!”

He adds: “I stay vigilant to make sure everyone is taking care of their bodies the way it is required, with plenty of nourishment, rest and positivity.”

“This isn’t a race, this isn’t a competition … It’s ‘you vs. you’, and when you learn that, you can will your way through adversity.”

“You learn that no goal is too high and no dream too big! My job is to bring that out in every person that steps through the doors at Fale Dojo.” 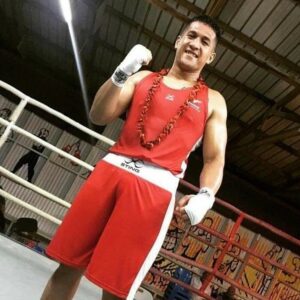 Heavyweight Boxer, Frank ‘the Tank’ Masoe lives and breathes his community. Born and raised in Mangere, South Auckland, Masoe was inspired by his father, Faafua, a former boxer, to follow in his footsteps.

“My mum and dad inspired me and my siblings to always have gratitude,” said Masoe who acknowledged his parents for setting a strong foundation for him to pursue his goals. “They did their best to give us the best life in the way of appreciating the small things such as time, family and community.”

Throughout Masoe’s decade long career, he held the New Zealand Heavyweight Boxing Championship (twice), as well as the Auckland Championship, New Zealand (twice) and the Australian Golden Gloves Titles. Masoe was also a Silver Medal winner at the Junior Oceania Championships and represented Samoa at the Commonwealth Games.

As the Dojo’s Boxing Trainer, Masoe is passionate about applying his wealth and experience to serve the community and help aspiring boxers to further their training.

“I love helping people progress, I love seeing improvement. That’s the perks of being a Boxing coach,” explains the ‘Tank’. “You get to see the development in their technical ability and their fitness and to see them apply all the skills that you’ve taught them in the ring. That’s what makes me very passionate about what I do.” 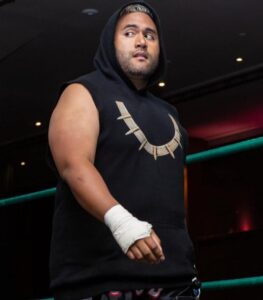 Mark Tui is experienced in the fighting disciplines of Aikido and Krav Maga in addition to being a trained professional wrestler (and Fale Dojo graduate), and amateur boxer.

As the Dojo’s Survival Trainer, Tui executes his skills in Aikido and Krav Maga to teach holds and strikes to be used in self-defence. These effective techniques can help people to quickly avoid conflict and escape dangerous harm, therefore maintaining their survival. Tui, a former bouncer, also applies his experience to help people deal with real-life scenarios affecting their safety.

Since the Dojo’s inception in 2016 Tui has helped steer the Dojo through its initial challenges and has been a key member of the team that has overseen the Dojo’s growth into a world-class training facility. 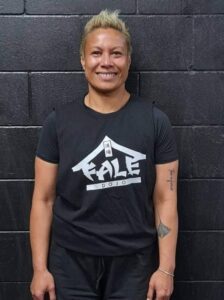 Aniva Laulu is a sought after Personal Trainer, Strength and Conditioning Coach, Group Instructor, and Boxing Trainer. Laulu competed extensively as an accomplished bodybuilder prior to her transition into boxing. Laulu has brought all of these accolades to her role as the Fale Dojo Boxfit Trainer.

Nicknamed ‘Drill Sergeant’, Laulu motivates loudly and enthusiastically to ensure that her students at Fale Dojo become the best they can be through Boxfit. 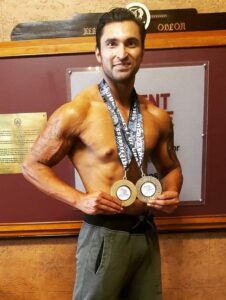 Vik Pawaar was one of the first to train at Fale Dojo when its Auckland premises opened 2016. As a graduate of the inaugural three-month professional wrestling course, Pawaar learned the Japanese strong style directly from Toks ‘Bad Luck’ Fale, the Dojo’s founder and Head Trainer. This discipline complemented Pawaar’s background in powerlifting and Mixed Martial Arts, as well as his most recent achievements as a Personal Trainer, and debuting at the 2020 New Zealand International Federation of Body Building show, and the BJJ National Grappler Tournament where he won medals at both competitions. Pawaar is the innovator of Kushti HIIT: a blend of disciplines that he has fused into an exciting workout.

“Kushti is the Indian word for ‘wrestling’ and HIIT is otherwise known as High-Intensity Interval Training,” Pawaar describes. “HIIT is a form of training for people that want to lose weight and get into shape but without doing steady pace cardio.”

He continues: “The objective of Kushti HIIT is that it will help you lose more fat in less time. Your body goes into a catabolic state and starts to lose more stored fat.”

“I’ve taken the best influences from my training in Indian wrestling, and Japanese wrestling and combined it with HIIT. The way it works is that you engage in Kushti HIIT workout for a certain amount of time before taking a break, and you repeat these intervals for the rest of the session.” 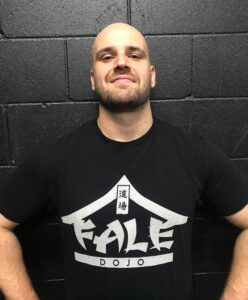 Michael Richards is a senior student and graduate of the Fale Dojo three-month professional wrestling course. His successful completion of the June 2018 intake earned him the opportunity to gain further training at the New Japan Pro-Wrestling Dojo in Tokyo.

In 2019, Richards brought his experience back to Fale Dojo, during which time he facilitated the inaugural Fale Dojo NZ try-outs. Richards also competed at Fale Dojo wrestling shows throughout the year, as well as New Japan Pro-Wrestling events held in Australia. Later that year, Richards made his NJPW debut as a participant in the Young Lion Cup in Japan.

In 2020, much of Richards’ time was spent as a Senior Lion training and mentoring the young lions, and leading various General Community classes such as BootCamp, and WrestleFit. Richards continues to lend his experience in these roles as he awaits his return to compete in Japan.