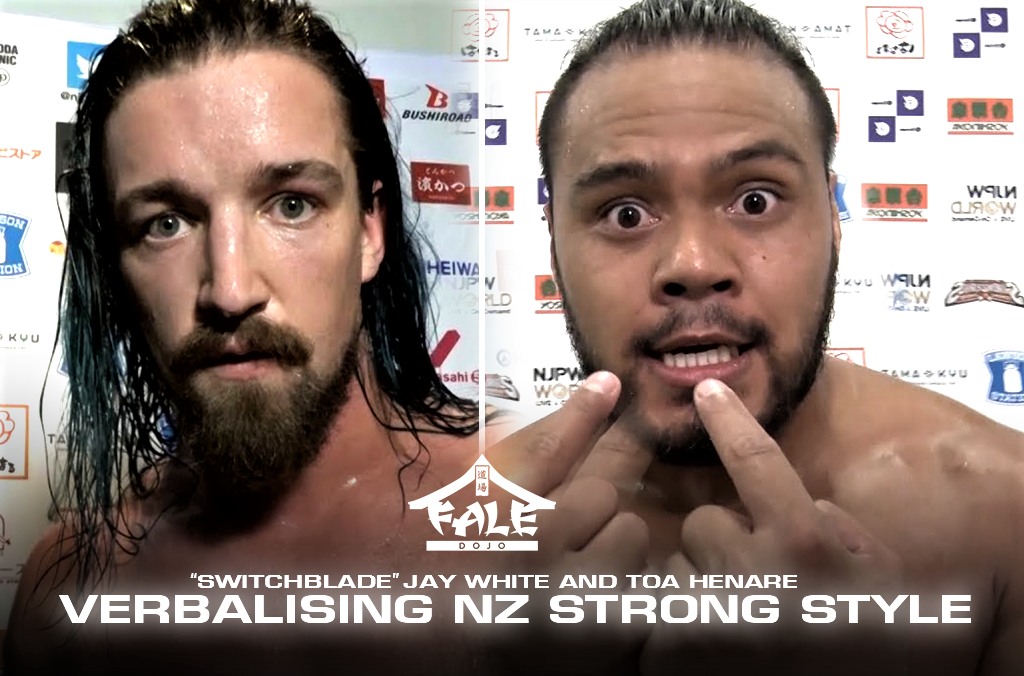 On 10 March 2021, New Zealand’s rich and multi-layered cultural identity was showcased in the main event of a New Japan Pro-Wrestling show. NZ’s own international stars “Switchblade” Jay White and Toa Henare, headlined the first round of the 2021 New Japan Cup tournament that was streamed live across the world from Sandan-ike Park Gymnasium in Fukuchiyama.

This landmark occasion was the first of its kind in recent times to feature two New Zealanders wrestle in the main event of a show by a worldwide promotion. “Switchblade” and the Maori Warrior, Henare, graduates of the Fale Dojo / NJPW Dojo pathway delivered a high-level strong style wrestling match that lasted close to 30 minutes. 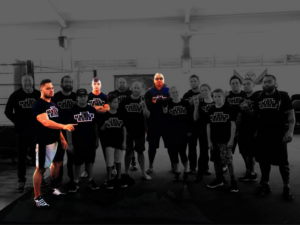 But what truly made this match a significant stand out was White and Henare’s excellent illustration in verbalising NZ Strong Style which was done in a series of interviews prior to their match. Using their impeccable oratorical abilities in the sound of their authentic and unfiltered New Zealand accents, White and Henare spoke passionately about their history together which began in 2015 as classmates at Fale Dojo. 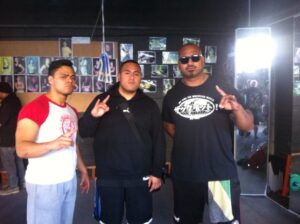 Born in the same year, Henare (who is older than White by a few months) grew up as an avid wrestling fan with dreams of one day becoming a wrestler. Henare was dedicated to making this dream a reality while becoming familiar with the local wrestling scene that was once a thriving international territory. Prior to his Fale Dojo training, Henare excelled in other combat disciplines in Mixed Martial Arts and winning national championships in Greco-Roman, Submission and Freestyle wrestling. Henare was approached to join the Olympic wrestling team, however, he regarded these achievements as a prerequisite to entering professional wrestling. Debuting in 2012, Henare’s main goal; though ambitious and innocent was limited to becoming the champion of a local independent promotion. That goal was immensely broadened after he met Toks ‘Bad Luck’ Fale, founder, co-owner and Head Trainer of Fale Dojo.

“I met Henare in 2014 and I saw such a hunger in this young man,” said Fale who helped Henare realise his unlimited potential. “The Fale Dojo gave him guidance to work for his dream.” 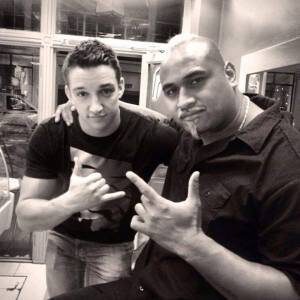 White, a laid back casual wrestling fan in his youth took a leap of faith and travelled abroad to the United Kingdom in bold pursuit of becoming a professional wrestler. Starting fresh in a new country and without a safety net, White would debut in 2013. He was eventually scouted by then NJPW star Prince Devitt who after discovering White’s New Zealand heritage, brought the young Kiwi to Toks Fale’s attention. Even at that point in time, White’s goal was at a world level.

“Jay’s story said it all,” stated Fale the ‘Rogue General’, reflecting on his initial meeting with White in 2014. “When Jay was 18, he left New Zealand and moved across the world on his own to pursue his dream. That told me he was hungry for it.”

White and Henare (along with Hikuleo) were the first graduating class of the Fale Dojo / NJPW Dojo system although their paths rarely interweaved until now. In spite of Henare’s years of preparation, White would surge ahead of his Warrior peer, climbing his way up the ranks to becoming the first New Zealander to hold the prestigious IWGP Heavyweight Championship in 2019, then headlining NJPW’s first-ever event held in New York’s Madison Square Garden. These bragging rights put ‘Switchblade’ in a favourable position to control the narrative.

“Henare, I am swimming in my prime,” roared ‘Switchblade’. “I am doused in my prime! I am covered, I am smothered in my prime, and that is not changing anytime soon.”

“Henare, you don’t matter,” White masterfully continued. “As an Aotearoa Maori warrior, I know you plan to bring the fight. I’m a different animal to anything else that you’ve ever encountered before: In this ring, or outside of this ring, on the streets of Auckland, or in that New Japan ring.”

“Henare, you will have your moment, in the spotlight with me, until I turn those lights off,” White concluded. “But don’t worry, even in darkness, you can still breathe.”

Henare, bursting with promise and determination ferociously roared back at his rival.

“I know, Jay,” The Maori Warrior growled fiercely. “I know the real you! I knew you before all of this, I know you.”

“You’re a Kiwi boy,” shouted Henare. “You’re simple. All of this flashy crap… that’s not you, I know you, I KNOW YOU!”

Henare the Maori Warrior continued: “No pandemic, no tsunami, no earthquake is going to stop me. This is my chance, I promised everyone back home, I’m not being sent back to New Zealand empty-handed… I want what you want Jay. I want to be where you are.”

“I know this burning desire in my heart is real, 100%, Jay, and I’ll do anything that it takes. I’d die for it,” Henare concluded with his chilling remarks. “You can’t beat me, because I’m prepared to die …. I’m prepared to die.”

The ability to freely communicate in NJPW interviews is encouraged early on in training. For example at Fale Dojo, the primary focus is for students to approach pro wrestling as a sport, develop the fundamentals in strong style wrestling, and find their fighting spirit. From there they would develop an authentic version of their wrestling persona in that particular part of their journey. By knowing who you are, your ability to get your point across will happen naturally. 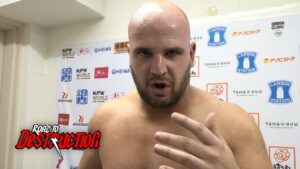 Michael Richards reacts to his first match in Japan – NJPW Road to Destruction, 2019.

“The backstage interviews in New Japan Pro-Wrestling are as real as it gets,” said Richards who competed at the 2019 Young Lion Cup tournament. “There are no scripts, they aren’t reading from a teleprompter. It comes straight from the heart.”

“It’s similar to the way rugby players give their thoughts after a big game,” Richards the senior lion added. “When you’re in the heat of the moment, you say how you feel, and if you’ve been doing it as long as Henare-San and Jay-San, then it becomes second nature.”

As the results of a major rugby game can incite a contrast of emotions, White and Henare’s reactions to the conclusion of their match were in stark comparison with each other. White began his trash-talking before the bell had rung and it intensified as the match progressed. His loud and imposing voice filled up the Sandan-ike Park Gymnasium, and he did not rest even after he had defeated Henare. White showed no mercy in demeaning his fallen prey, going to such lengths as to deny Henare assistance from the young lions that were surrounding ringside. Heartbroken and distraught, Henare could only wait until he was away from King Switch in the interview area backstage to express his utter self-disappointment.

It is no surprise with Fale Dojo becoming NJPW New Zealand Dojo – an official part of New Japan Pro-Wrestling that the appeal of NZ graduates would be entrusted as top-tier talent. This has taken years of preparation for co-owners Toks Fale and Mark Tui to get the Dojo to this particular stage, not forgetting the tremendous sacrifices made by Jay White and Toa Henare, as well as Michael Richards.

The emergence of New Zealanders has become an important element to NJPW’s expansion with English speaking fans that also coincides with NZ being well received across the world. Traditionally a rugby nation – the home of the mighty All Blacks, New Zealand has experienced international excellence in other fields. This is evident with the contributions of Israel Adesanya, the Ultimate Fighting Championship (UFC) competitor who at every opportunity will make it a point to acknowledge his Kiwi upbringing. Much is the same for Steven Adams the first New Zealander (of Tongan descent) to play in the National Basketball Association (NBA), and of course Taika Waititi, the multiple award-winning filmmaker of proud Maori heritage, who has ingrained the NZ accent and humour into the Marvel Cinematic Universe through his portrayal of the superhero, Korg.

Fale Dojo has become a world leader in professional wrestling training and is the pathway for international non-Japanese wrestlers whose goal is to compete in New Japan Pro-Wrestling. The Dojo has attracted students from all over the world – even despite a global pandemic, enquiries continue to flow in from abroad. With an international roll call of 38 graduates (as of December 2020), Fale Dojo prides itself on the success of its alumni, and what they make of their opportunities. As is demonstrated by the continuing success of “Switchblade” Jay White and Toa Henare.