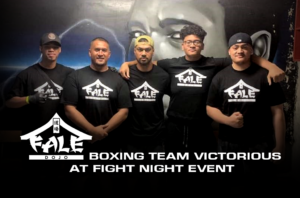 The Fale Dojo Boxing Team, under the guidance of Frank ‘the Tank’ Masoe, competed recently at the HardKnocks 13 Fight Night event promoted by HardKnocks Boxing. Auckland’s ABA stadium, the site of HardKnocks 13 was electrifying; packed with an all-inclusive, family-friendly crowd high in anticipation of the three-hour action-packed event that was about to take place.

The Fale Dojo Boxing contingent included brothers Hunter and Clinton Saio, and Lance Taito, who were selected by Masoe from his Boxing fighter’s class to represent the Dojo. Under the invaluable expertise of Masoe, all three Dojo representatives emerged victorious in their matches by way of TKO and Unanimous Decision. 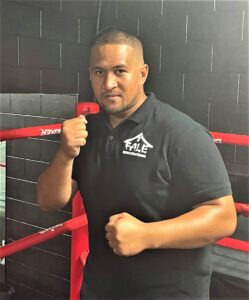 “I’m pretty stoked after all 3 boxers coming away with 3 big wins, 2 by way of TKO in the first and second round,” said Masoe the former two time New Zealand Heavyweight Champion. “They really did their families, friends and Fale Dojo proud especially themselves.”

“I’m not surprised at all with the results,” Masoe added. “I was confident in knowing that I selected the right people to put into the team.”

Masoe spoke at length about some of the challenges that his team encountered during their training and how they overcame these obstacles.

“My prep with the team had its ups and downs, with Auckland going into level 3 lockdown, unexpected family and work events also injuries,” Masoe explained. “It was a rushed two-month training camp. We had something going smooth the first month but I noticed there were no improvements made while the boys were sparring three weeks in a row. So with three weeks left until HardKnocks 13, we changed up the routine.”

Masoe continued: “I took them out of their comfort zone and enlisted the services of NZ’s top-ranked amateur, and world-ranked amateur boxers and had the team spar multiple rounds with them.”

“Sparring is the closest thing to a fight which is why there was a lot of it being done in the duration of their training camp,” Masoe continued. “I told them many times ‘sparring is way harder than the fight itself’. From there, they started to believe in themselves and confidence grew. I too was confident and had butterflies going into Fight Night because they did the hard yards.”

“Performance for me is all I want and if the result of the fight is a win that’s a bonus,” stated the ‘Tank’. “If they had lost and left everything in the ring and walked out with no regrets I’d be happy. If they left the ring knowing they could’ve done more I would be disappointed.”

Upon his arrival as Boxing Trainer at Fale Dojo in January of this year, Masoe’s goal in addition to teaching the weekly boxing class was to assemble a team to compete at events by September. However, Masoe exceeded his estimation by five months. Furthermore, the client interest in Masoe’s classes has grown to where he is currently leading two classes a week (Tuesdays and Thursdays at 7 pm), as well as taking Personal Training sessions throughout the week at the Fale Dojo facility in Otahuhu, Auckland.

“My goal is to set up a social fundraiser for the fighters to help fund their gear such as gloves, headgear and other necessities,” Masoe expressed in closing. “I’d also like to get the team more matches under their belt, but for now, it’s back to the drawing board to map out upcoming fights.”

Founded in 2016 by Head Trainer Toks Fale, Fale Dojo is a professional wrestling training school and fitness facility based in Otahuhu, Auckland, New Zealand. Toks Fale first came into the wrestling scene as the first non-Japanese student (otherwise known as a young lion) to graduate from the New Japan Pro-Wrestling Dojo in Tokyo in 2009 before making his NJPW debut on 4 April 2010. Known professionally as the “Rogue General” Bad Luck Fale, his wrestling status was elevated in 2013 when he became one of the founding members of Bullet Club. Regarded as the hottest faction in pro wrestling, Bullet Club has maintained its dominance in the wrestling world for a decade, due partly to Fale’s reputation as the Club’s revered enforcer.

Toks Fale’s passion is to give back to his community. He envisioned Fale Dojo as a way of sharing his experience and knowledge with his community with the goal of presenting professional wrestling as a viable career opportunity. Toks Fale’s reputation helped ensure a pathway between Fale Dojo and New Japan Pro-Wrestling which has allowed graduates from the Dojo’s three-month professional wrestling course to pursue further training at the New Japan Dojo and from there the possibility of gaining a spot on the NJPW main roster.

Notable graduates to emerge from Fale Dojo include “Switchblade” Jay White, Aaron Henare, Hikuleo, Robbie Eagles, Gino Gambino, and Aaron Solow. The incentive and the opportunity to gain Fale’s insight has drawn in many locals, as well as attracting students from all over the world.

As a local fitness facility, Fale Dojo is equipped to offer a wide variety of classes to the general public aimed at building up people’s fitness, their self-confidence and supporting their journey and personal development. These classes include Body Shock fitness, WrestleFit, BoxFit, Boxing and Survival self-defence. The trainers that lead the classes are experts in their disciplines who relish the opportunity to pass on their knowledge and understanding. The Fale Dojo coaching staff reflect New Zealand’s rich and multi-layered cultural identity; they are equipped and ready to welcome people from all walks of life.